At a modern piano

Dr. Maria Horváth has taught piano professionally for over 30 years to students of all ages, abilities, and levels of accomplishment in the United States, as well as Hungary. Her college-level teaching experience includes piano and piano accompanying instruction for graduate and undergraduate students at Illinois State University, piano for piano majors and music appreciation at Lincoln Land Community College, class piano at Millikin University, piano and class piano at Louisiana State University, and assiting with piano instruction at the Franz Liszt Academy of Music in Budapest, Hungary. Prior to establishing The Art of Piano studio, Maria’s pre-college-level teaching experience included three years at the Preparatory Department at Millikin University (piano and solfège for the Children’s Choir), five years at the Music Academy at Louisiana State University (piano), a year assisting with piano instruction at the Franz Liszt Academy of Music (both the preparatory division for children/youth of exceptional talent and the college division), and teaching privately since her high school years. Maria’s students won numerous auditions, scholarships, prizes and honors over the years.  In 2016, Maria received both the Teacher of the Year and the Member of the Year awards from the Decatur Area Music Teachers Association, the local chapter of the Music Teachers National Association. In 2017, she was selected Teacher of the Year again by DAMTA, as well as runner-up for the Teacher of the Year award at the state level. 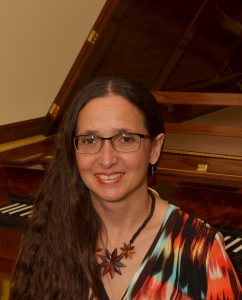 At her five-octave Viennese fortepiano

As a performer, Horváth has appeared at a wide range of venues as a soloist and orchestra soloist in France, Hungary, Austria, Slovakia, and the USA. She has also performed in a variety of chamber ensembles and orchestras and accompanied singers, instrumentalists, choirs, as well as opera and musical theater productions. Since 2006, she has been Principal Keyboard (piano, celesta, harpsichord, portative organ, synthesizer) player with the Illinois Symphony and Illinois Symphony Chamber Orchestras. She is also a frequent solo and chamber recitalist. More recently, Maria has developed a keen interest in early keyboard instruments, especially the fortepiano, as well as historically informed performance, and has been presenting programs on the fortepiano, in addition to the modern piano. Her replica of a five-octave Walter fortepiano from Mozart/George Washington’s time built in 2015 by Ron Regier has become a source of renewed inspiration and allowed her to share her passion for early pianos with a variety of audiences.  Maria is also a frequent adjudicator (state, district, and local competitions), master class clinician, and lecturer.  Her article The Whole Piano is Mine!  Keeping Today’s Beginners Engaged Through Attractive and Motivational Repertoire was recently published in The Piano Magazine: Clavier Companion, the flagship magazine for piano teachers and enthusiasts.  She is a member of several professional organizations, including the Westfield Center for Historical Keyboard Studies, the country’s preeminent organization for the advancement of keyboard music; Historical Keyboard Society of North America; Early Music America; College Music Society; Music Teachers National Association; and National Federation of Music Clubs.

Horváth was awarded the D.M.A. (Doctor of Musical Arts) degree in Piano Performance from Louisiana State University, the Artist-Teacher Diploma in Piano at the world-renowned Franz Liszt Academy of Music in Budapest, Hungary, and the M.M. degree from Illinois State University. She has also earned a M.S. degree in Arts Technology at Illinois State University, concentrating on music technology and various other technologies relevant to performing artists. Horváth’s teachers included Dr. Jack Guerry (LSU), Gellért Módos (ISU), Márta Gulyás, Edit Hambalkó and Gyöngyi Keveházi (F. Liszt Academy). She has also participated in numerous piano masterclasses and mastercourses with world-renowned artists and was the recipient of prestigious scholarships, including those for the Conservatoire Américain in Fontainebleau, France, and the International Keyboard Institute and Festival in New York city. Her fortepiano studies include three week-long mastercourses with the legendary Malcolm Bilson in Hungary, private lessons with Bart van Oort in the Netherlands, and a materclass with Alexei Lubimov at the Forte/Piano Festival at Cornell University, NY, USA.

Maria resides in Rochester, Illinois with her family.